Meet a people and a culture

Madagascar is fascinating due to its biodiversity but also by its cosmopolitan culture, with origins from both Asia and Africa. “The Great Island” will not fail to amaze you, and its welcoming and friendly people will accompany you into discovering its island through tradition and the know-how of its culture.

Crafts of all kinds 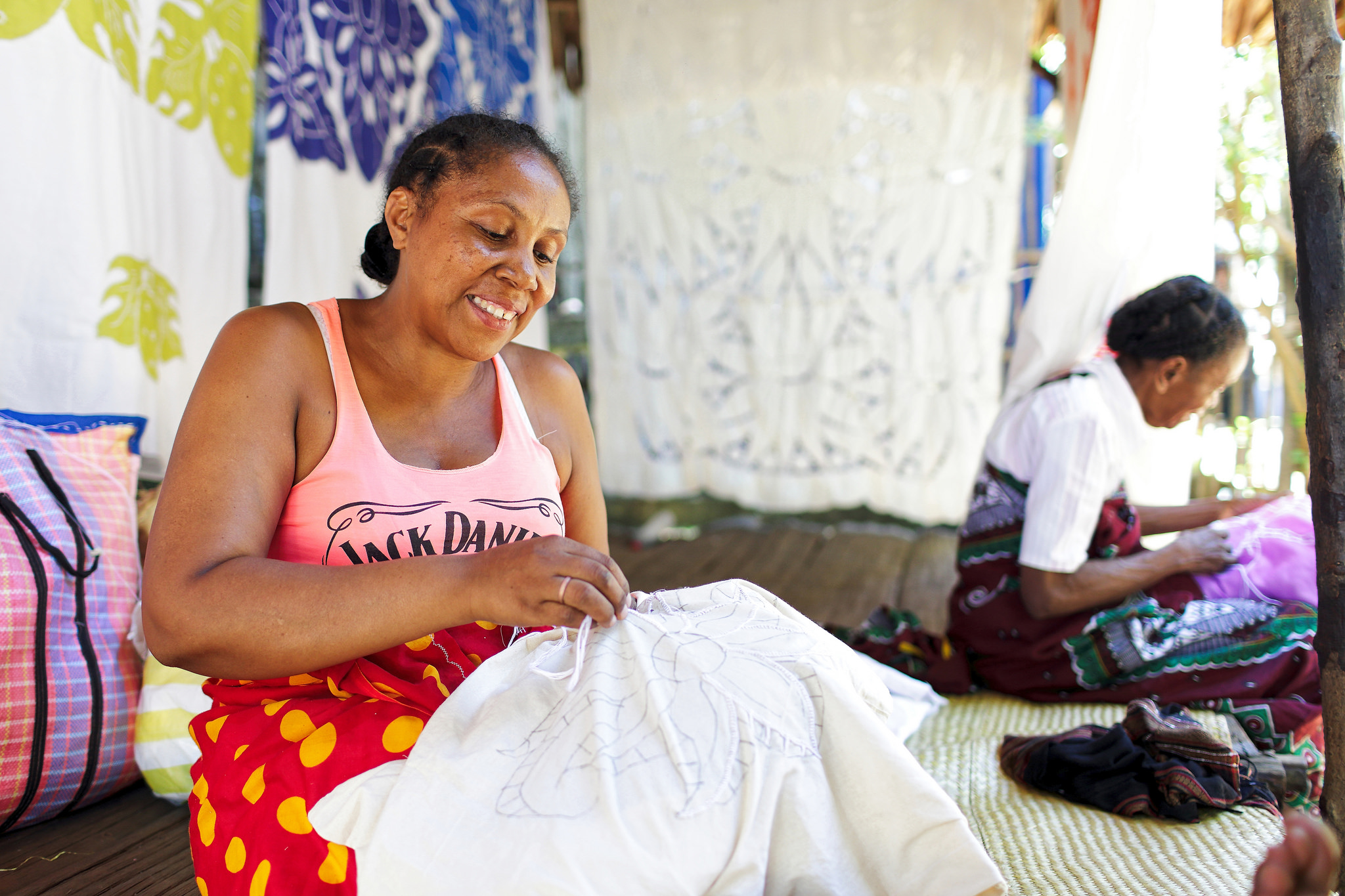 Crafts are mainly rural but tend to develop in cities. Handicrafts are very often useful and related to agricultural activities. In recent years, the quality of crafts has increased with more decorative and aesthetic handicrafts.

For example, embroidery is true tradition, seen as all the young girls learn how to sew and to embroider. To observe the production of natural silk (from the silkworm) and wild silk (found in the tapia forests), many factories can be visited. The craftsmanship of the wood is one of the great pride of the island. Sculptures of all kinds is a must in Madagascar, whether it is the Zafimaniry sculptures, classified as a UNESCO World Heritage site, or the simple marquetry. 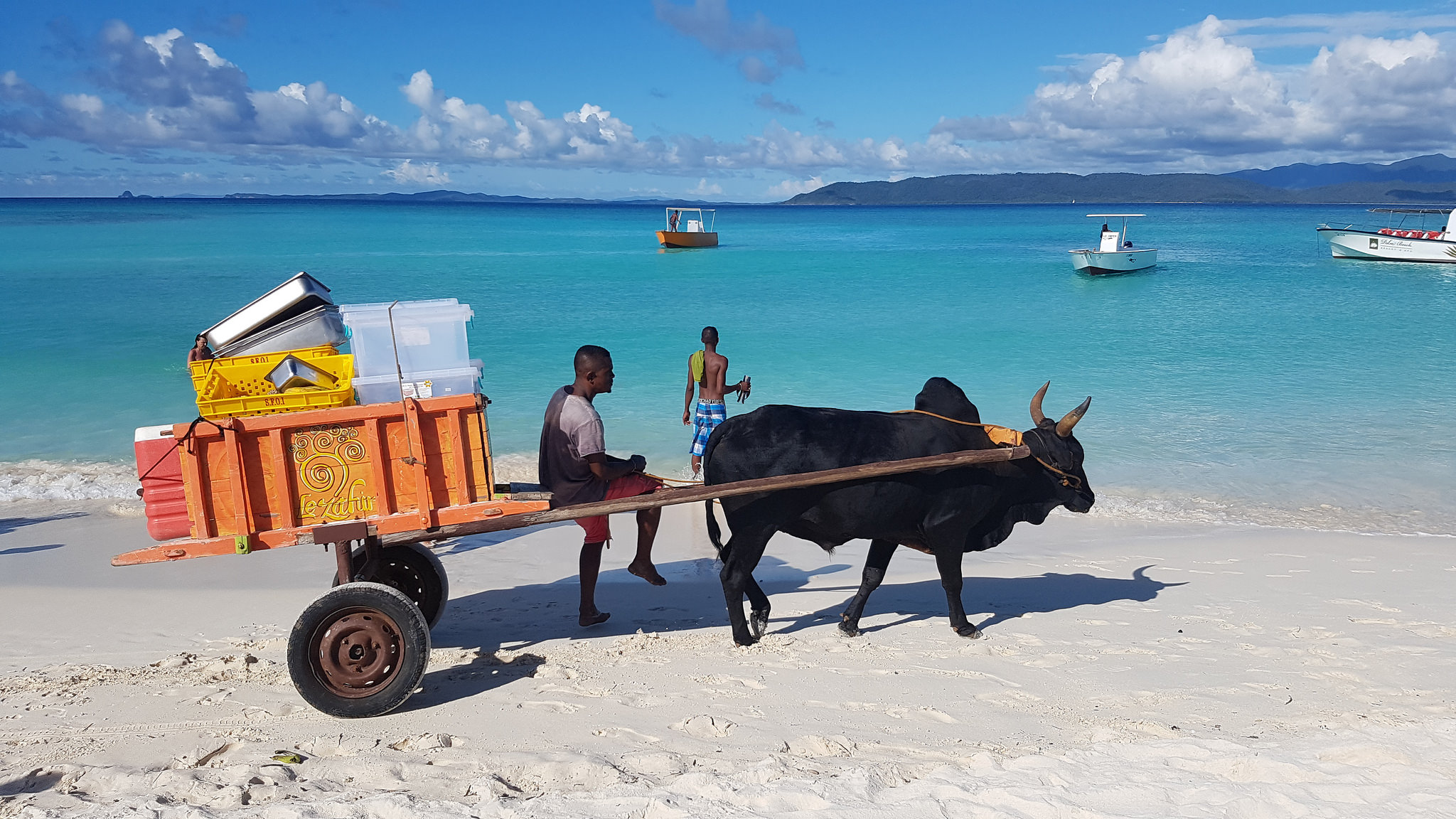 The name Madagascar, cannot be mentioned without mentioning rice. The country lives at the rhythm of the two seasons of rice (harvested in December/January and April). Landscapes that are often embellished with a real patchwork of small rice paddies also change considerably over the seasons. The zebu is omnipresent in the Malagasy culture. It is the symbol of all values. The color of its dress expresses the joyful or painful circumstances of life. The bucranes (skull and horns) adorn the tombs. The Betsileo or “Savika” bullfight, consists of clinging as long as possible to the bump of these superb animals. The bullfight is only intended to pay tribute to their strength. These performances, especially in Fianarantsoa or in the surrounding villages, must be attended, when traditional music and costumes are added to the festival. Zebus are regularly associated with field work. You will see small herds, harangued by young guardians, who trample the soil to prepare them for the replanting of rice. 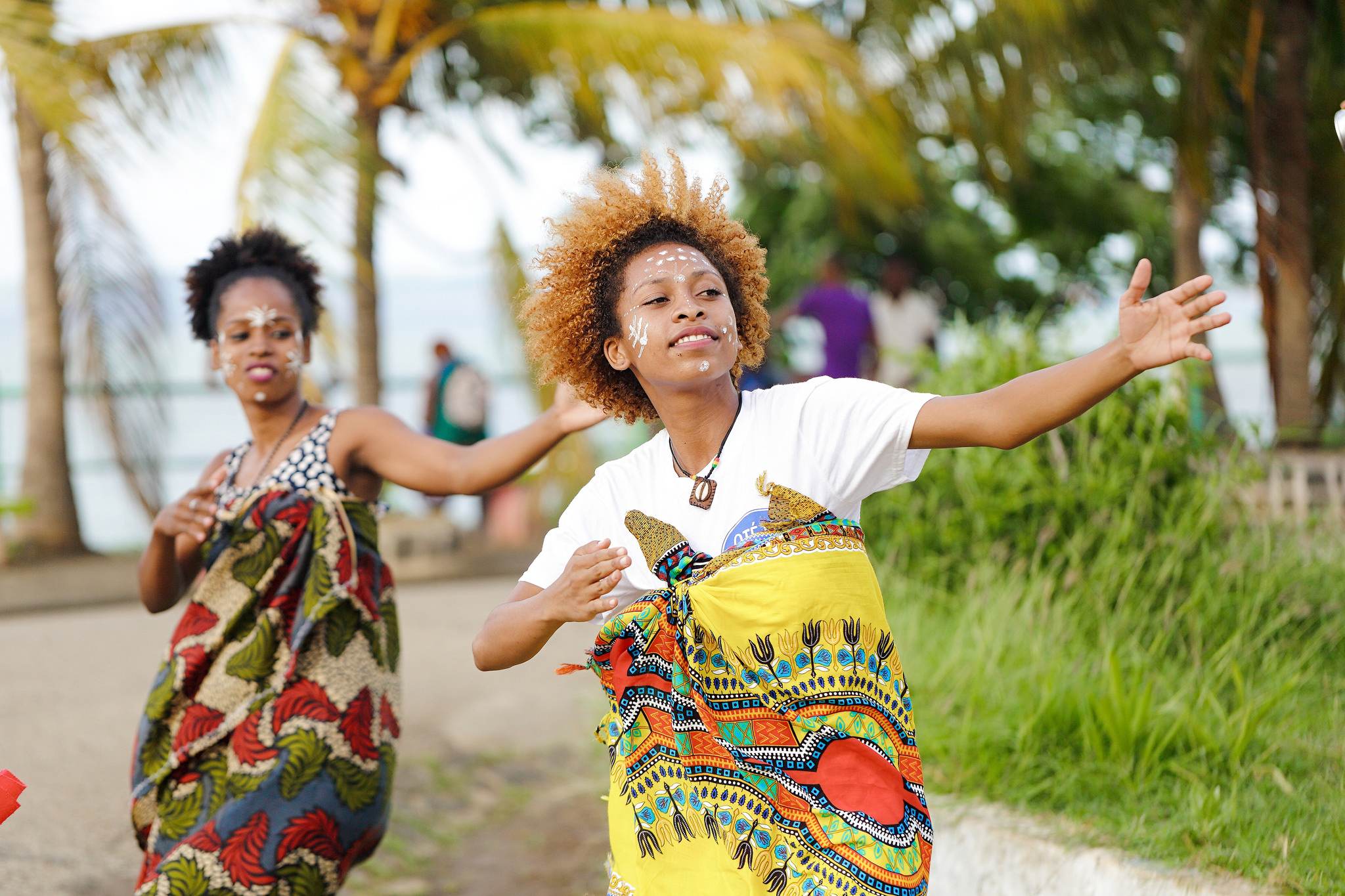 In the most popular neighborhoods of big cities and on the sidewalk or in the “bush” villages, you will be surprised at how many card and domino players there are. The Fanorona is more traditional and original and is practiced on the highlands.

You can also attend different festivals, often combining music and parades, including the following:

Donia in Nosybe (around Pentecost), the whale festival in Sainte-Marie (between August and the beginning of September), the Feria Oramena or lobster festival (June) in Fort-Dauphin, Festimania in Ambositra (June), Toliara Tsimiroro “Tulear never sleeps,” Avy Letchi e! (November) Tamatave, Bassessa Tour (August) in Mahanoro, Akory Ialahy (festival of folk dance in June in Brickaville), the regattas (August) and carnival of Diego suarez (June), the wine festival in February in Fianarantsoa, the festival Makoa in Morondava (tribute to slaves in July), the festivals of the SAVA region (October). 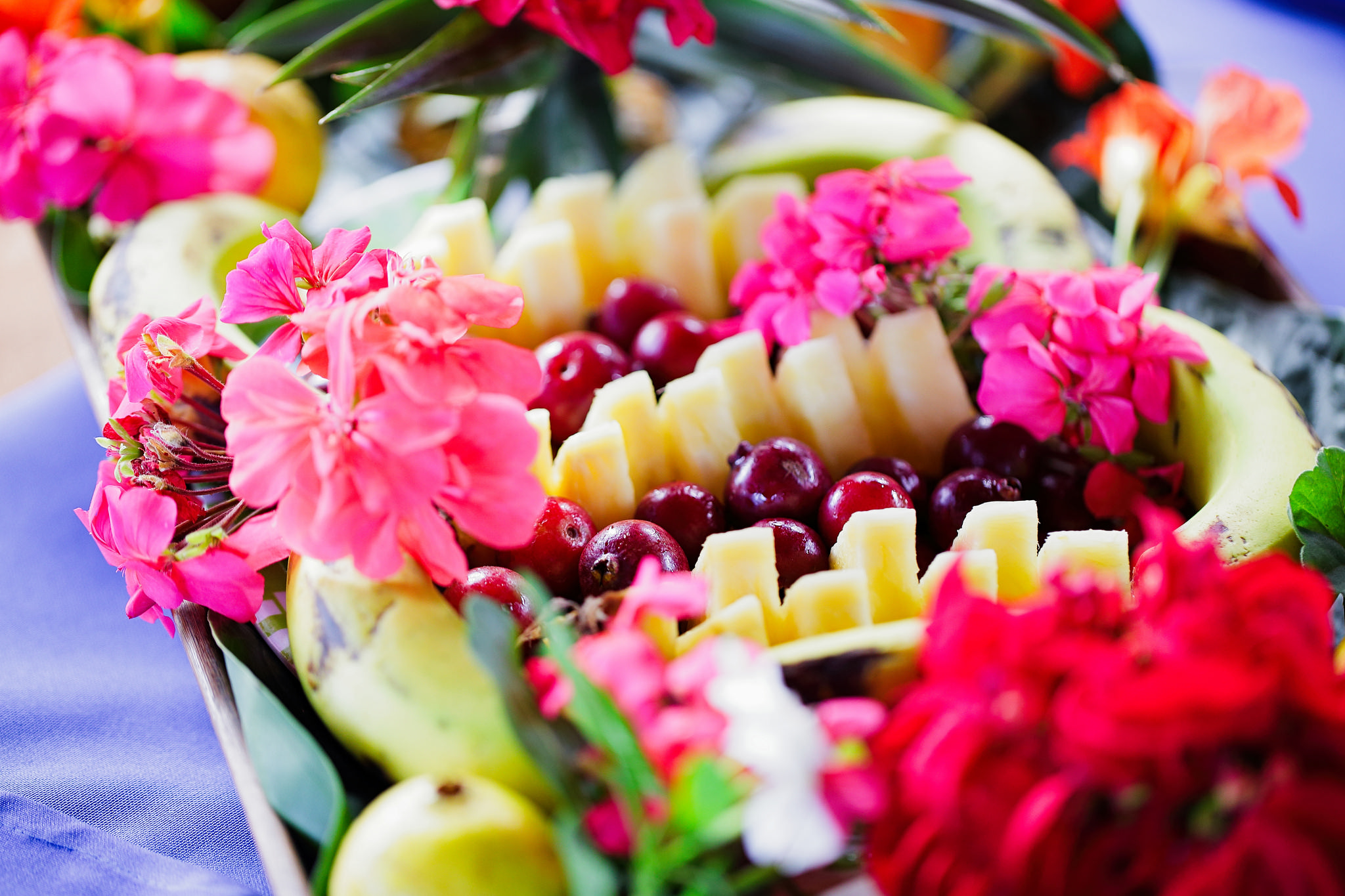 The Malagasy cuisine has some traditional dishes. First and foremost, the Zazu Romazava is a true national dish. It consists of small cubes of zebu meat served with rice, tomato sauce, and “light broth” which is the translation of the word Romazava. The red of the tomatoes and the green of the green leaves decorating the broth, and the white of the rice, make up the colors of the Malagasy flag.

The Henakisoa sy Ravitoto (pork with pounded cassava leaves) and Henakisoa sy Amalona (pork meat mixed with eel), are meals both accompanied by the “Ranovola” (water used to put in the rice).

Apart from these traditional dishes, we must insist on the exceptional organoleptic qualities of local Malagasy produce: both the fruits and vegetables (on the Highlands grow on the same soil green beans and christophines, apple trees and lychees…) and meat (zebu is the most tasty). A great number of excellent restaurants dot the country and it can be said that gastronomic delights are now part of the joys of a trip to Madagascar, because some chefs know how to combine French recipes and tasty local Malagasy products. Lovers of fish and seafood will enjoy almost all places that serve food on the coasts. Those who love Asian cuisine will appreciate the famous Chinese soups of Tamatave. 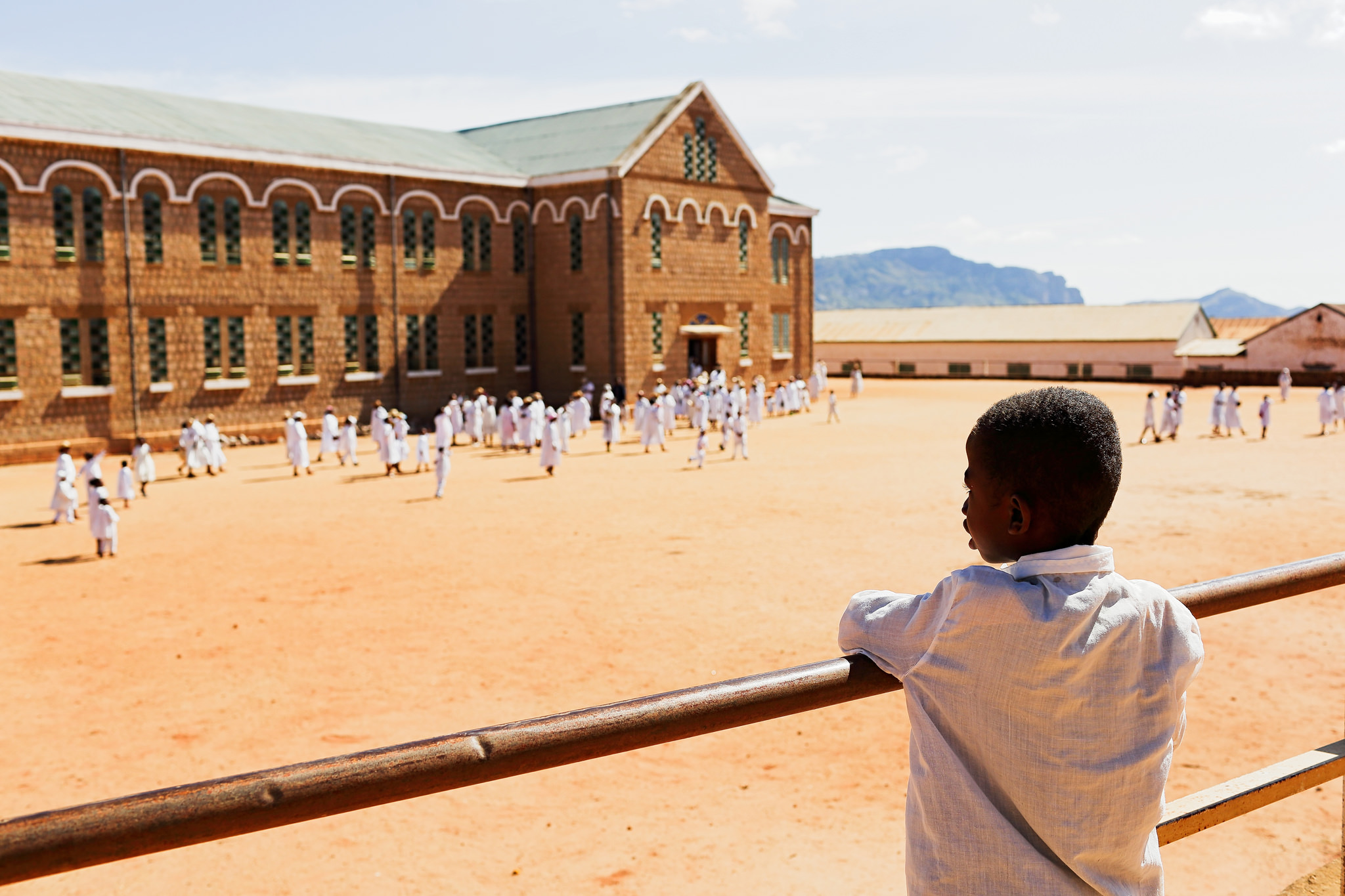 Two cities have a beautiful collection of colonial houses: Tamatave and Diego Suarez. Thanks to the guides of the association “Les Amis de Toamasina,” you can easily visit the city to discover its monuments, squares, museums, and former colonial dwellings. In Diego Suarez, the Regional Tourist Office has set up a series of large explanatory panels that detail the history and the architectural richness of the city. Besides colonial architecture, the most beautiful historical architectural ensemble is the Rova de Manjakamiadana or the Queen’s Palace. This Palace overlooks Antananarivo, and was unfortunately, set on fire in November 1995. It is largely rehabilitated today. There is also the Rova of Ambohimanga. The seat of the Merina royalty was one of the twelve sacred hills around Antananarivo. About twenty kilometers north of Antananarivo, there is a fortified palace or “Rova,” a UNESCO World Heritage Site since 2001. A moving discovery of the royal residence of Andrianampoinimerina, the great king of Malagasy. The Rova of Antongona, is indeed perched on an enormous rock that seems to dominate the Merina county.

Less than an hour from the capital, you can reach the summit, after a short ascent of paths that was built 150 years ago and bordered by well preserved walls. At an altitude of 1500 meters, you can enjoy a magnificent view of the city.